Raleigh, NC — A Triangle congressional candidate recently handed out hats to voters that were made in China.

Bo Hines, the 26-year-old Republican political newcomer backed by former President Donald Trump in the 13th Congressional District, has long championed a free market economy that prioritizes US manufacturing. His campaign website notes that Hines would work “to build an America-first economy” and “fight for and support American infrastructure” if elected.

Hines’ campaign confirmed on Tuesday that Hines and staff members distributed hats at a Saturday event in Johnston County that were made in China.

Photos obtained by WRAL News show a white hat labeled “Bo Hines for Congress” with a “Made in China” label. The hats also included a domain for a website of a South Carolina business called Whispering Pines Sportswear. 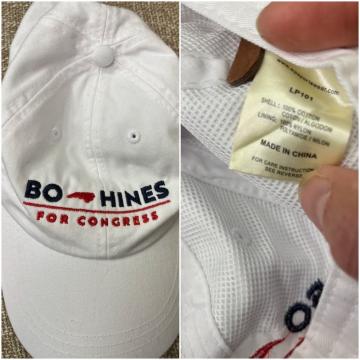 Rob Burgess, a spokesman for Hines’ campaign, said his team ordered the hats and other apparel this year through Edge Promo Team, LLC, a Clayton-based printing and embroidery company. Campaign finance records show the campaign placed an $8,838 order from the Clayton business on Jan. 6.

“Bo Hines is a champion of the America First agenda that is spearheaded by President Donald J. Trump,” Burgess said in a statement. “That is why our campaign sought the services of a Johnston County apparel producer for a limited run of baseball hats. The campaign doesn’t believe it is good practice to question small business owners on where the material for their products comes from. Bo Hines is proud to support North Carolina small businesses and that will never change.”

A different hat available for purchase on Hines’ campaign website is described as “designed, embroidered, and packaged in the USA!” Burgess said the hats available on the website were not made by Edge Promo Team.

Hines has come under fire in recent months over his lack of longevity in the district. Hines spent a season playing football at North Carolina State University, lived in the area at the time and voted in Wake County for the 2014 general election.

Hines later transferred to Yale University to further his political ambitions and worked as an intern on Capitol Hill. He returned to North Carolina to earn a law degree at Wake Forest University.

When he announced his congressional bid, he spent much of 2021 and early 2022 campaigning in multiple districts in the surrounding Greensboro area before settling on a seat that now includes all of Johnston County and parts of Wake, Wayne and Harnett counties.

Hines last month moved to Fuquay-Varina, fulfilling a campaign pledge to relocate from a condo in downtown Winston-Salem to a property in Fuquay-Varina.