From the moment we set foot on this planet, most of us are ready, able, and eager to learn to make sense of this confusing world around us. But unfortunately, some people skip on acquiring common sense and decide they can easily glide through life at others’ expense. One story on the popular “Am I The A-hole” subreddit is a perfect example of that.

User tawayaitalifeskills opened up about a relationship conundrum he had with his girlfriend a couple of years back. You see, he left her at the airport and went on a two-week trip to Southeast Asia alone after realizing her passport was expired. Sounds a bit off-putting, doesn’t it? Well, there is a bit of context to take in.

The young woman is notoriously irresponsible and believes her SO and loved ones exist in her life only to fulfill her needs. “Whenever she’s asked for help with something, what she really is asking for is for someone to take responsibility for the task,” the user wrote and was surprised to find out his girlfriend from him can be so out of touch with reality. Read on to find out how the story unfolded and weigh in on the situation in the comments! 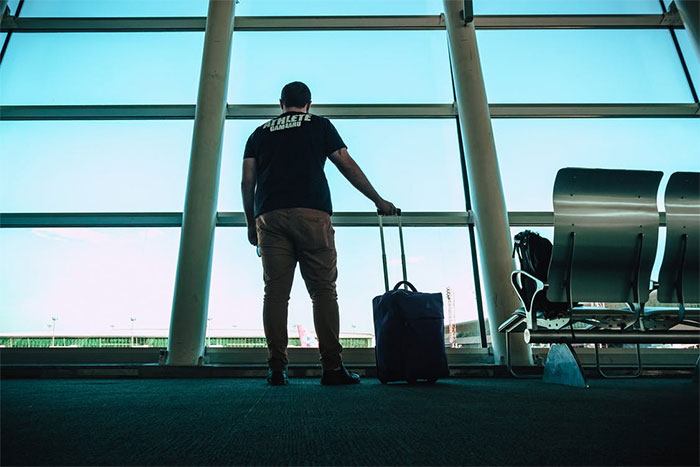 So when she fell short of that standard, he turned to the AITA community to ask people to evaluate the situation 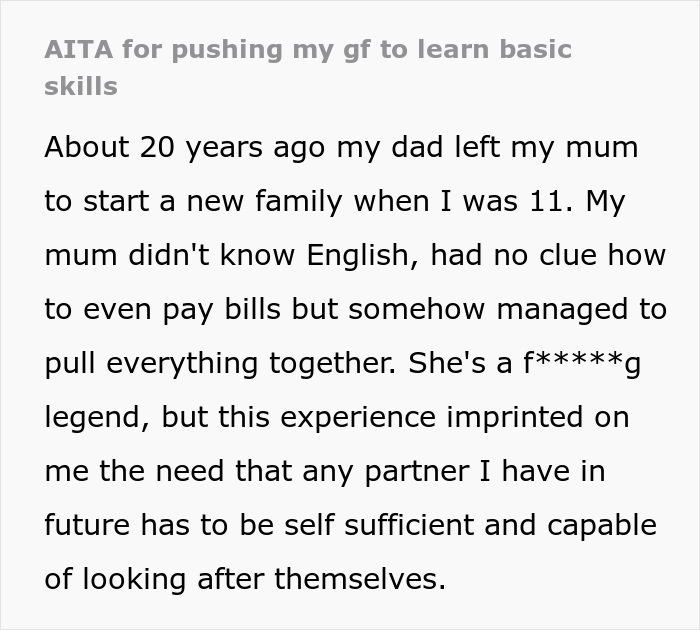 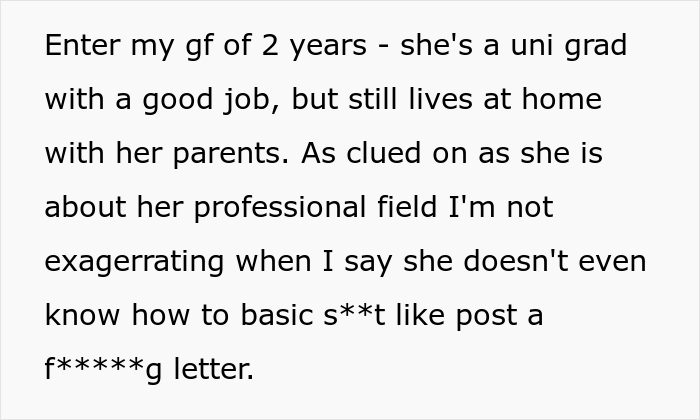 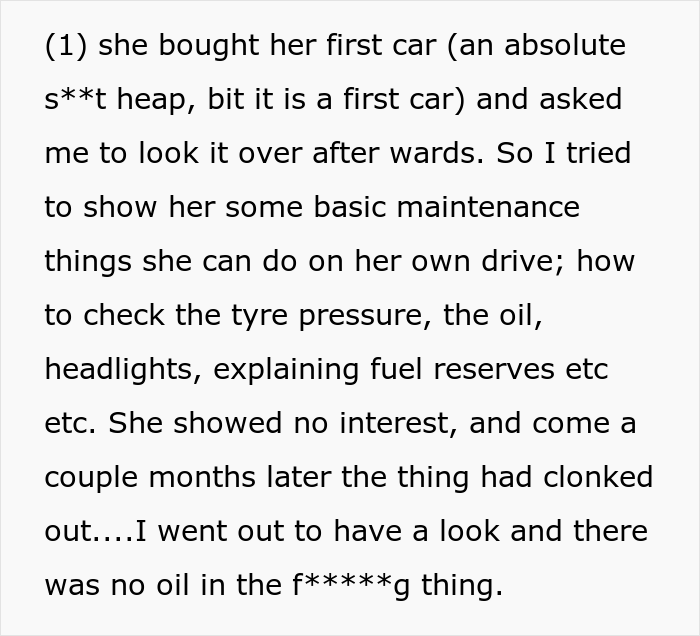 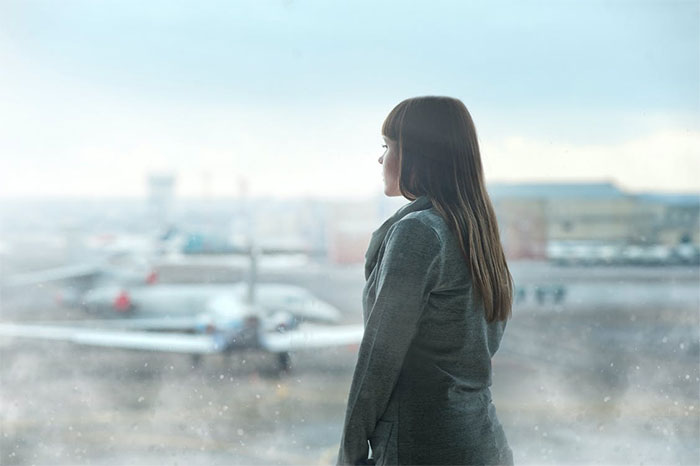 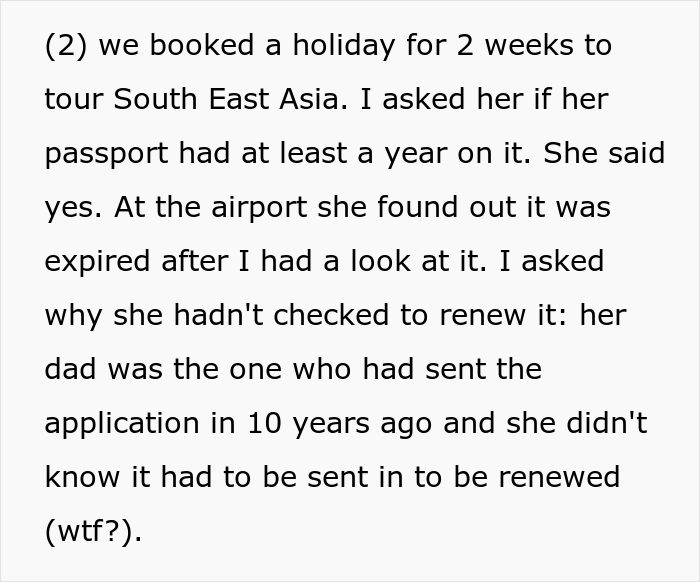 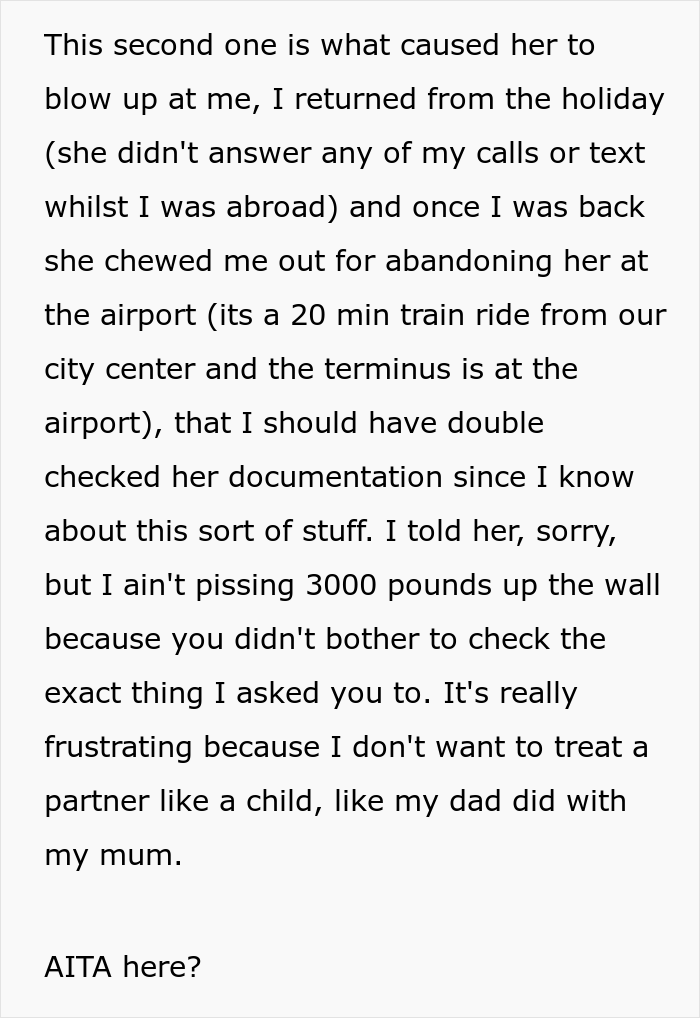 Tawayaitalifeskills’s post sparked a heated debate in the comments. After all, leaving your partner at the airport and going on a dream-like trip without them leads to many questions and a lot of eyebrow-raising. But most members of the AITA community determined the boyfriend was not in the wrong in this situation. Many criticized the user’s disorganized girlfriend for not taking any personal responsibility for her actions, despite her being an adult who is successful in her professional life.

At the same time, several Redditors had a different opinion. While the girlfriend is missing a big chunk of knowledge she should have known by now, people argued she probably has no clue what the requirements for these basic life skills even are. You see, the fact that we sometimes grasp obvious things only later in life is nothing new.

“We literally are hardwired to move the common occurrences into the background of our consciousness so that we can look out for novel things,” Joshua Klapow, Ph.D., a clinical psychologist and creator of Mental Drive, told us in an earlier interview. “The obvious goes in the background, so we reserve brain bandwidth to notice the novel, standout occurrences in our life.”

I have explained that we sometimes miss the obvious things because we might not be psychologically ready to handle them. “A relationship that is toxic, a love interest that is too intense, a realization that we don’t have a skill or strength we believe we have.” While these things may seem clear to the outside observer, “our own psychological defenses go up and protect us from seeing the obvious. Because to do so might overwhelm us emotionally and psychologically.”

Moreover, it won’t be surprising to hear that professionals say our parents’ can influence our adult relationships in many ways. They are the first people who show us what love is, so the way we give and receive it is usually shaped by those early experiences.

Relationship coach Marta, the founder of MyCoachMartaawning bored panda that our behavior is a direct outcome of the patterns we’ve developed throughout life. “Let’s say this woman grew up in a family where the mother stayed at home and lovingly nurtured the family, while the father took on the role of provider, paying bills and taking care of all other ‘life admin’.”

“Children learn by observing what is modeled, so even if nothing was ever explicitly stated to her about this, she subconsciously picked up and registered the fact that it’s the man of the household who is in charge of those matters,” Marta explained and added it’s more about an unconscious belief that “this is how things are”, rather than assuming her partner will always be there to help out. “She may be either completely unaware of this belief or ashamed if she is indeed aware.”

After reading the story, most people sided with the boyfriend

While many Redditors accused the girlfriend of not putting in the effort to acquire common life skills, her behavior could stem from the mentality she has towards life. The relationship coach explained that overparenting and not being given enough responsibilities or opportunities to discover our own competence are two more ways this mindset might arise.

“This has a huge impact on our adult relationships,” Marta added. “We need attuned parenting that provides a mix of nurture and a safe base to return to as we explore the world and our role in it in order to create a solid sense of self and internal models of relating.”

“When these needs aren’t met, we develop insecure or unhealthy patterns of relating to others as well as warped perceptions of life, which have far-reaching consequences that extend beyond our interpersonal relationships.”

Since the girlfriend’s behavior seems to cause recurring arguments in the relationship, Marta suggested this problem is worth working through together. “I call curiosity and compassion the relationship superpowers. Many fights can be avoided by being curious about why our partner acts the way they do,” she said.

“All the problematic behaviors began at some point as means to keep us feeling safe, loved, and like we belonged. If we keep that in mind, we can have compassion even for the things that get on our nerves,” Marta added. “We can then talk about what’s going on, how it’s affecting the relationship and the partners individually, and come up with ideas to move forward in ways that benefit everyone.”

However, we can’t force others to change. We can try to inspire them to address their maladaptive strategies, but that can only happen in an emotionally safe environment, Marta argued.

“When conflict is approached with a win-win attitude, I rarely encounter someone who is unwilling to adapt. However, if she is firmly set in her ways de ella, expecting the partner to take care of some aspects of her life de ella, it will be up to him to decide where his boundaries de ella are and whether he is willing to compromise them.”

“Most couples, fortunately, discover so much more about each other when they begin communicating with curiosity and compassion that they become more committed to the success of their relationship and are willing to do the work,” Marta concluded.