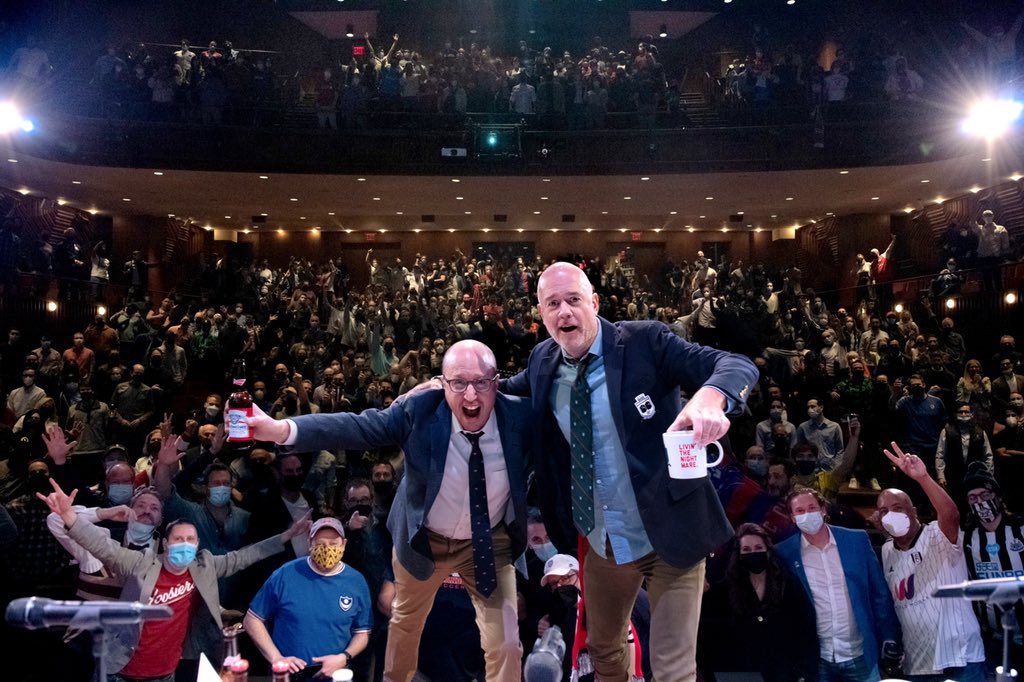 Something miraculous happened Tuesday night at NYU’s Skirball Center in lower Manhattan, and no, it was not seth meyers killing with David Moyes jokes.

the Men in Blazers podcast returned to a live recording format after several very challenging years off. Thanks to the cultish devotion of football fans (or “soccer” fans, for most of us Americans) the crowd hung on every pop culture-cum-Premier League reference. It was a gathering of like-minded fanatics, but it wasn’t just about footy. The evening was a triumphant and at times tear-jerking ode to what a fucked up few years we’ve all been through, and endured.

For the unfamiliar, Men in Blazers is the brainchild of Roger Bennett and Michael Davis, two British ex-pats, though Bennett is now a proud naturalized American citizen. The pair tackle the international world of football but mostly focus on the Premier League and the United States men’s and women’s national teams. They do so with rapier wit, almost-too-obscure pop culture references, and a self-effacing mockery that makes them so relatable and endearing to listeners.

Thanks to the reliable generosity of my friend Don SteeleI was able to attend the event (and can be seen in the photo above, neatly below Rog’s Budweiser, where I should be).

This is where I admit that I never actually listened to the My b podcast. I’m familiar with their work, I watch their television show occasionally, but I’ve never been a podcast guy. I love music when I commute or work out. Sue me.

From that perspective, I was excited to attend the Tuesday night taping. I felt like I was diving into some sort of secular church service I’d heard great things about but didn’t quite get myself.

What I experienced was pretty remarkable. It has less to do with the world of sports, and more with a feeling we are sorely missing now after several years of chaos, a feeling Bennett and Davies so masterfully delivered.

After some perfunctory opening greetings and a group photo, the show launched into a retelling of all the crazy shit that we’ve endured in the past few years. Immediately, Bennett was fighting through emotions in recounting how difficult dealing with Covid-19 has been. The pair revealed those deeply concerning first few weeks and months when we were all freaked the fuck out.

Davies and Bennett then did something that I haven’t really seen done since the pandemic started, and didn’t realize how badly I needed: they recounted the really challenging chapters of our collective battles with sanity in a manner that both allowed us to relive some of the scariest moments, but also celebrate the human condition of standing brave in the face of adversity. Courage, as Bennett loves to say.

To understand the strange marriage of ironic detachment and earnestness at play, consider Bennett’s use of “courage” as his tag line. People of a certain age will recall that former CBS Evening News anchor Dan Rather was widely mocked for ending each broadcast by saying that word. In a classic post-modern style, Bennett has sampled the word, reclaiming some portion of its meaning, with a wink and a nod to its maudlin Rathereque origins.

So the evening opened with the “sad part” part of the programming which was, in fact, a cathartic reliving of what life was like just over two years ago.

There was the mention of Sassuolo forward Francesco Caputo who, in the last game played before a 69-day break due to Covid, celebrated a goal by holding up a piece of paper with the message “Everything will be alright, stay at home.”

There was also Borussia Dortmund celebrating a victory in the first game played after the lockdown ended.

“I’ve rarely been as excited for a football game outside of a World Cup” Bennett recounted. “The sense of normalcy of football coming back even under these surreal conditions can bring. A weird spectacle. Football shorn of handshakes, spiting, and fans. A weird hush descended right before kickoff when you’d normally have a surging roar of the crowd. In its place we had silence and we wondered ‘would it be enough?!’ But we had football, beautiful football.”

Bennett shared how he felt that all of the world’s football fans were connected “in a human way that only sports can conjure” following Erling Haaland’s opening goal.

But he then described Dortmund players celebrating by bowing to an empty set of stands — normally called the Yellow Wall filled with 25,000 screaming ultras — which Bennett describes so prosaically.

It was an “eerie and haunting moment filled with love and sense of loss, and watching at home I fucking sobbed,” Bennett said, sobbing while recounting a story of his sobbing, in what was perhaps the most meta onomatopoeia ever.

There was also mention of the murder of george floyd and the racial reckoning around the world that followed.

“We’ve always said that football is merely a mirror that reflects the society that surrounds it,” Bennett said. “And nation to nation, team to team, every club marked this moment that reverberated around the globe.”

Bennett then recalled a moment that stayed with him, six days after George Floyd’s murder, English sensation Jadon Sancho, then still in the Bundesliga, ripped off his shirt after scoring for Dortmund and paid tribute to Floyd with this hand-written message. “A London-born star, playing in Germany, but his mind was on the tragedy in Minnesota. The world was watching,” Bennett noted.

To be fair, Bennett was laughing through much of his tears, a mess of emotion received by the adoring crowd with laughter and applause because it was the catharsis we all needed. The crowd was a big, rowdy mash of reflection, relief, pride in our collective resistance, and joy that almost everyone had returned to this long-delayed family reunion.

There was one notable individual missing, the much-beloved My b superfan Jason Kennedyquien passed away nearly two years ago. A diehard Liverpool supporter, his life was celebrated at the live recording with a rousing rendition of Merseyside anthem You’ll Never Walk Alone. Even OG Evertonians in attendance sang aloud while Kennedy’s signature Hoosier striped blazer hung under a spotlight on stage.

The evening was an emotional revival that I did not know I needed. And I chose to share my experience not because I am a huge fan of Men in Blazers (though I am a recent convert.)

Every media outlet should take a cue from what Davies and Bennett did. Our communities need to confront the fucked up perry of the past three years and process it. We need emotional punctuation — to end the last chapter so that we can start a new one.

Men in Blazers did that with humor, tears, laughter, and a celebration of the human spirit. Sorry to be so corny, but sometimes you have to be courageous enough to be a cheeseball.

Listen to the podcast below…the first 20 minutes are a reflection of the past few years, which is followed by an interview with USWNT and Gotham FC’s Kristie Mewis and late night host and massive West Ham fan, seth meyers.

This is an opinion piece. The views expressed in this article are those of just the author.