A pair of peculiar pickers show off slimmed-down setups that swirl, snarl, and speak!

Matt Sweeney doesn’t want to dazzle you with rock guitar. That’s boring. That’s lazy. At least to him. He wants to mesmerize you.

“Really, that’s the point of music: to get people’s minds off of whatever and to hypnotize them a little bit,” Sweeney told GP in 2021. After beginning his Superwolves collaboration with Will Oldham, “that’s when I thought, ‘Cool, I did the thing that I wanted to do. I can fingerpick now and I can play with a really great singer who is working in an idiom that I hadn’t worked in before.’

“I started playing with Will and that gave me the opportunity to keep developing the way that I was playing, because it went well with his singing. After a couple of years, that led to Will suggesting that we write songs together.”

The audible opiate that Sweeney provides has also cast his spell over the works of Rick Rubin, Johnny Cash, Neil Diamond, Adele, Cat Power, Run the Jewels, Chavez, John Legend, Zwan (collaboration with Billy Corgan), Tinariwen, “Cowboy ” Jack Clement, Billy Gibbons, and Margo Price. And with every episode of hypnosis comes a trance-breaking snapback. Providing that rhythmic recoil is Sweeney’s current foil, Emmett Kelly. Both have worked with Oldham, but until now—in the current Superwolves line-up—never together.

Kelly steps into the fold with an indie and outsiders Rolodex filled with names like Ty Segall, Angel Olson, Azita, Cairo Gang, Mikal Cronin, The CIA, Earth Girl Helen Brown, Magic Trick, Doug Paisley, and Joan of Arc. Sweeney sums up their guitar-nership with his typical, sly-and-dry snark: “What’s important about the way me and Emmett play together is that we never talk about it. [laughs]. It’s true! He’s like the best guitar player. He’s a master at making everything sound better. We’ve both worked together—but mostly separately—with our singer Will Oldham, and it was his suggestion from him that we should all go out together [without bass and drums] because it should be good. But really, we’ve never had to talk about it, and we just play. It’s been a lot of fun.”

So, when GP‘s Chris Kies recently connected with Sweeney and Kelly, they were providing a guitar backdrop for a headlining set fronted by Bonnie “Prince” Billy Oldham at Nashville’s Mercy Lounge, supporting Sweeney and Billy’s 2021 release, super wolves. While the conversation with both does cover their Spartan setups, the meat of the message is how gear is a tool for storytelling, humility, and liberation. Oh… but Kelly does reveal a Japanese gem that takes a guitar signal and reanimates it into anime speech-like phrases!

[Brought to you by D’Addario XS Electric Strings.] 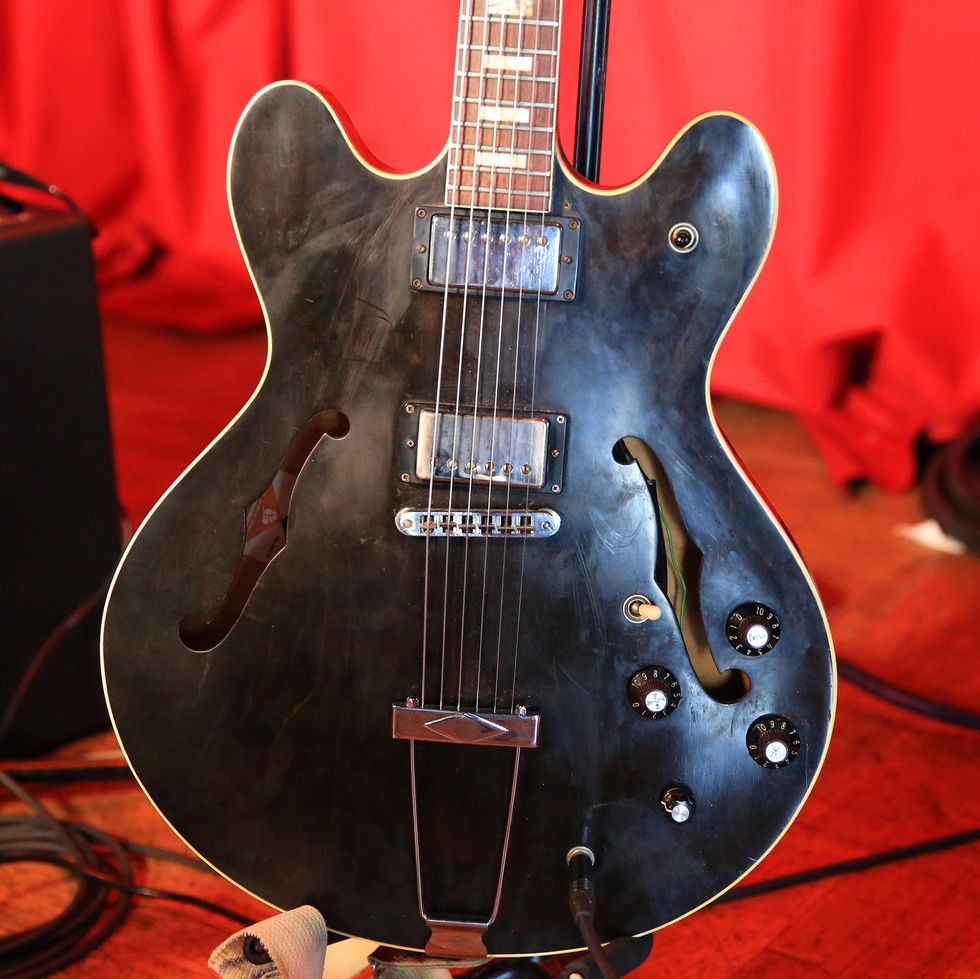 Matt Sweeney is a simple man. He tours with just one guitar: the above 1976 Gibson ES-335TD. He’s favored flatwound strings (La Bella Jazz Flats or D’Addario ECG25 Chromes gauged .012–.052) for nearly two decades. And he’s dropped the pick for nearly as long. Sweeney had an interesting take on fingerstyle playing with flats in an interview with GP in 2021: “I don’t know any other way to get a tone other than from your amp and fingers. Otherwise, you’re not getting your tone; you’re processing your tone. That’s another thing that fingerpicking brought out: Your right hand is your mouth. That’s what’s making the sound come out. But again, speaking of tone, we seem to largely agree that the guitar recordings everybody freaks out about are usually from before the ’60s. They’re using flatwound strings, they’re not using pedals, and it sounds really great.” 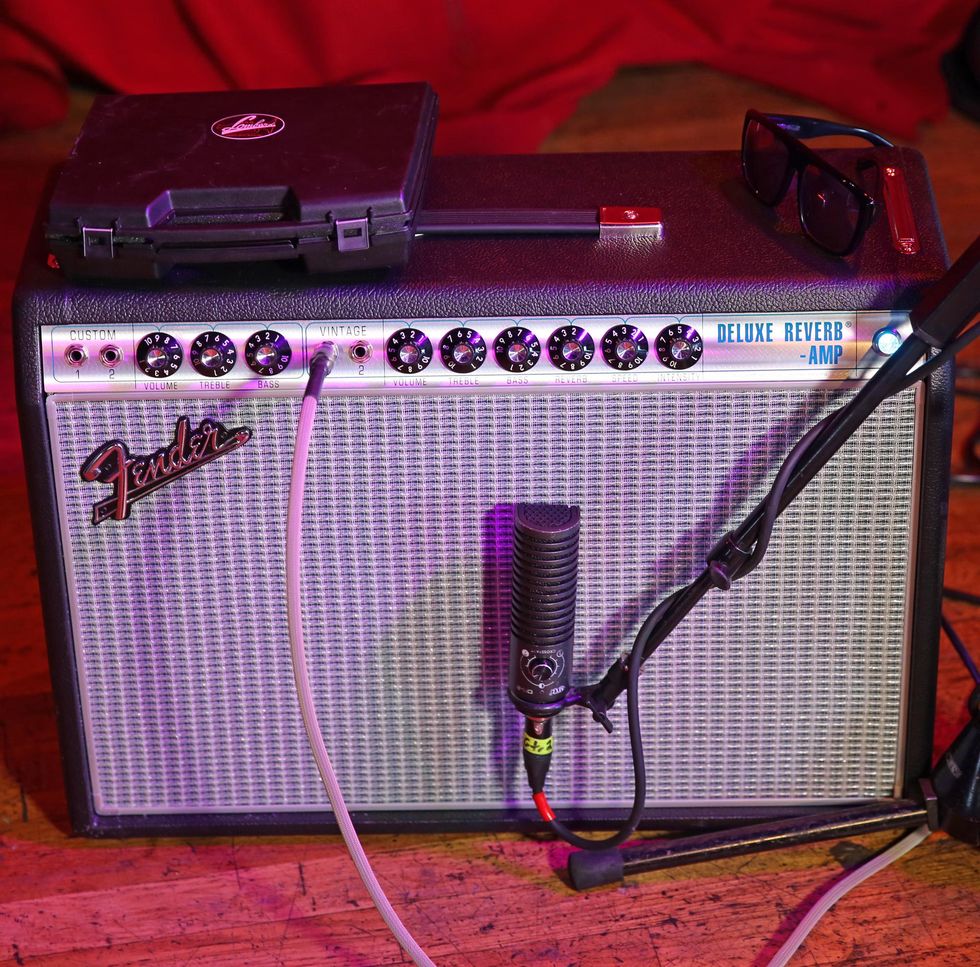 “I recommend the shit out of these Fender recreations,” concedes gear novice Sweeney. “Item [the above Fender ’68 Custom Deluxe Reverb] sounds good out of the box and I frequently use its reverb and tremolo.” 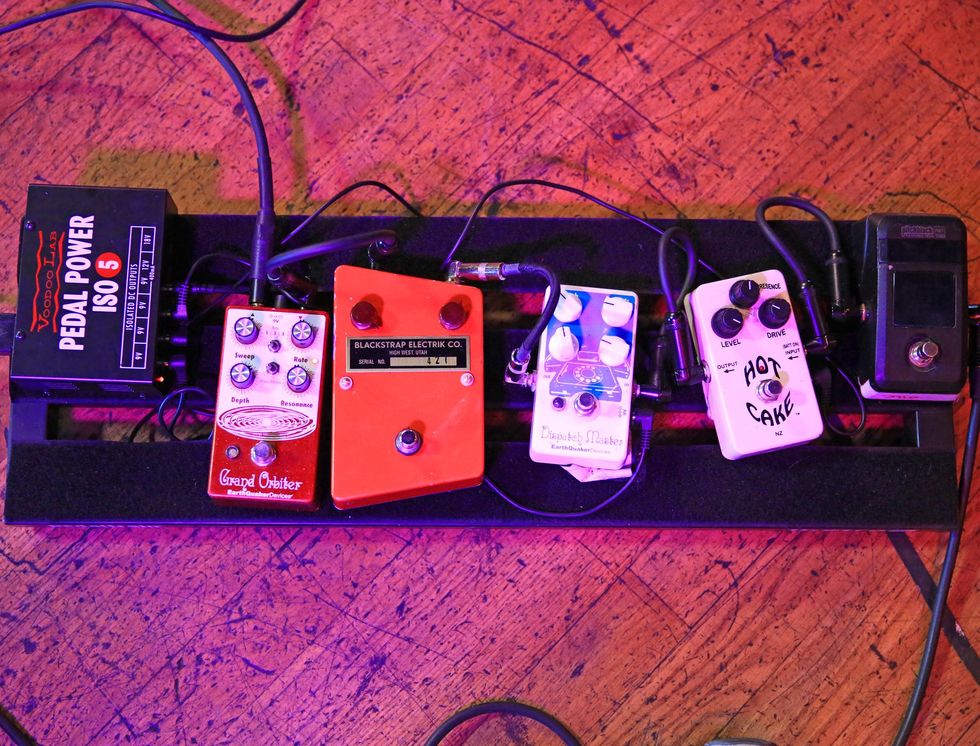 sweeney told GP “I love pedals. Pedals are really cool, and they’re fun,” he says. “But I established the way I sound without relying on pedals at all.” And then Josh Homme (Queens of the Stone Age and Eagles of Death Metal) dropped some science. “I’ve pointed out, ‘Get any kind of pedal that will make the sound wave a little different.’ Pedals that put things out of phase and make it poke out a little bit are cool.” Well, Sweeney’s current economical, waveform-changing pedalboard includes a couple of EarthQuaker Devices (Grand Orbiter Phase Machine —“I love using phaser because people hate it”—and Dispatch Master delay & reverb), a Blackstrap Eletrik Company Greenleaf (based on the 1960s John Hornby Skewes Zonk Machine fuzz), and a Crowther Audio Hotcake. A Voodoo Lab Pedal Power ISO-5 gives everything life.

Not Your Dad’s Tele, but Donahue’s Tele 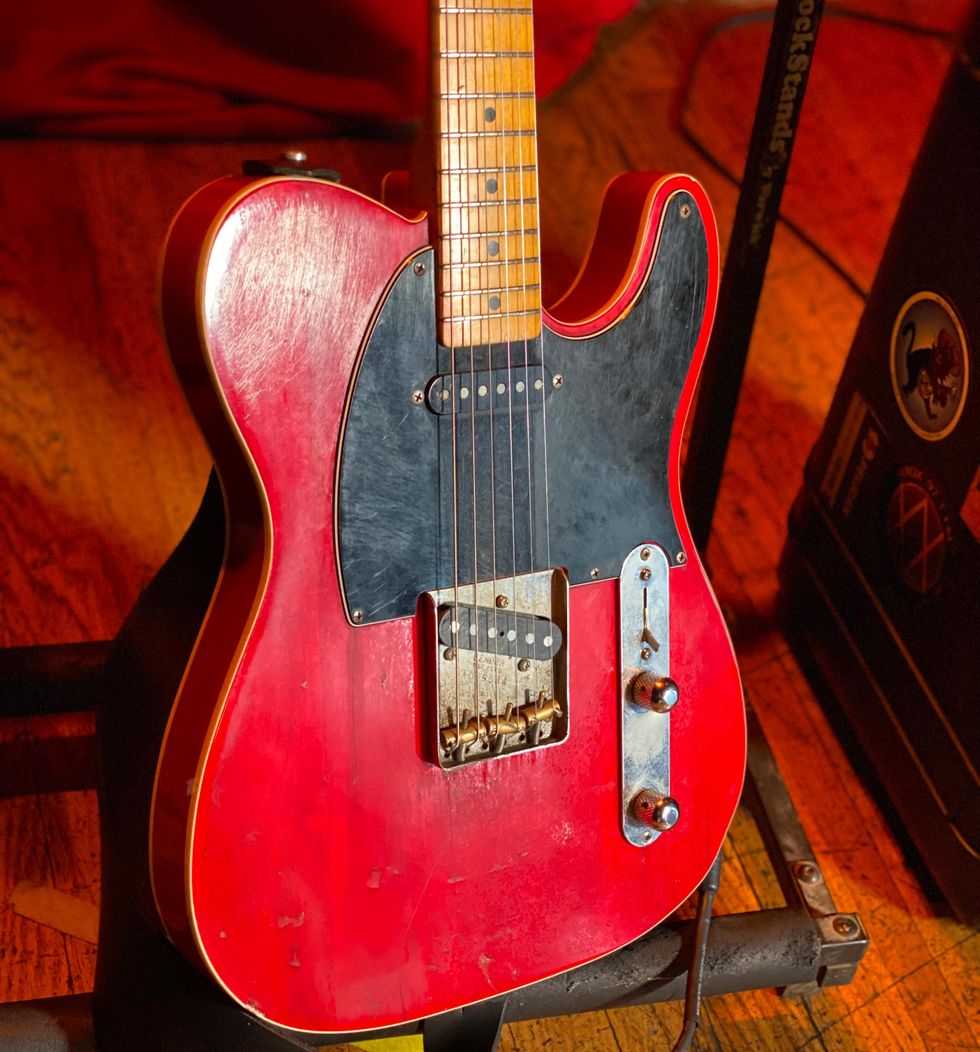 Emmett Kelly’s only touring companion is this 1990s Fender (MIJ) Jerry Donahue Signature Telecaster that’s based on an early ’60s model—aside from the ’50s V neck profile, per Jerry’s specs.

“I never liked a Tele until I found this one, and now I love it completely,” Kelly gushes. “To the point that I’m actually in the process of modding my Strat to be electronically identical to this guitar.”

It’s stock, including a unique pickup pairing (an alnico Tele in the bridge and an alnico Stratocaster in the neck) and versatile 5-way switching. (Learn more about the wiring and how to implement it into your T-style with this helpful Mod Garage guide.) Kelly uses various brands of strings (.011s) and plucks the Tele with Herco thumbpicks. 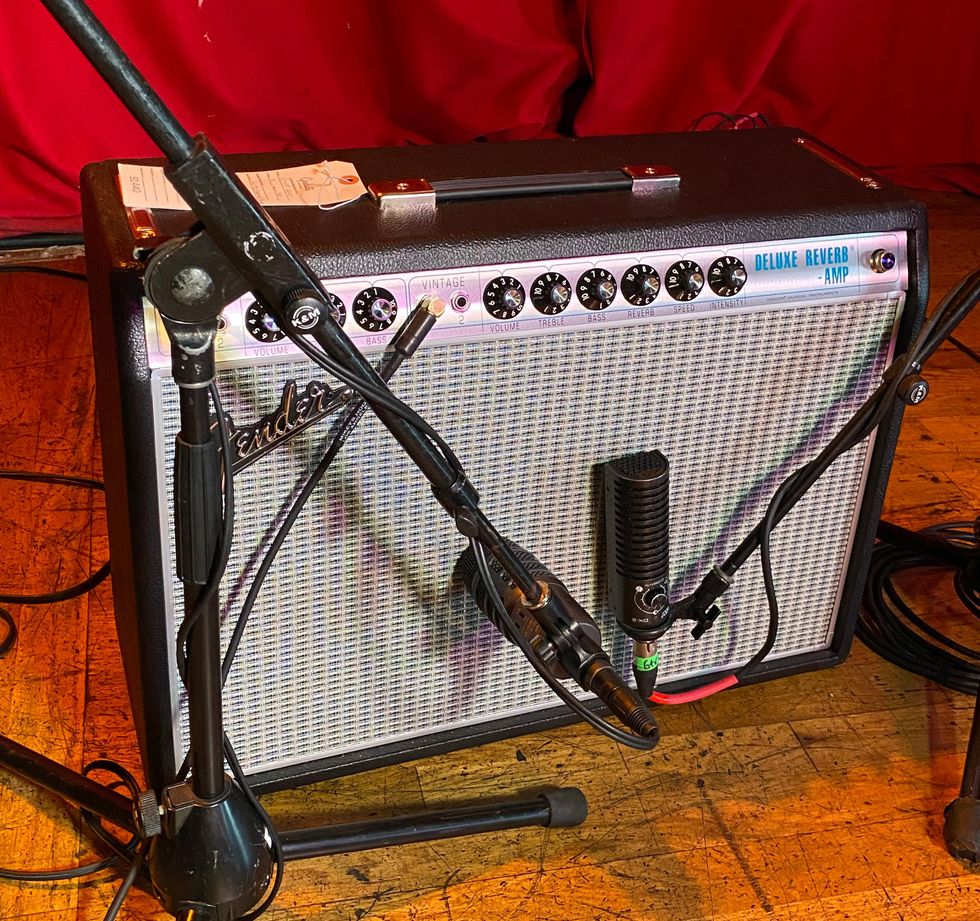 Kelly normally plays in more aggressive, louder bands, but for this gig the stock Fender ’68 Custom Deluxe Reverb is the perfect platform for unveiling crisp clean tones and a terrace for the tone twisting goodies on his board.

Speak of the Devil 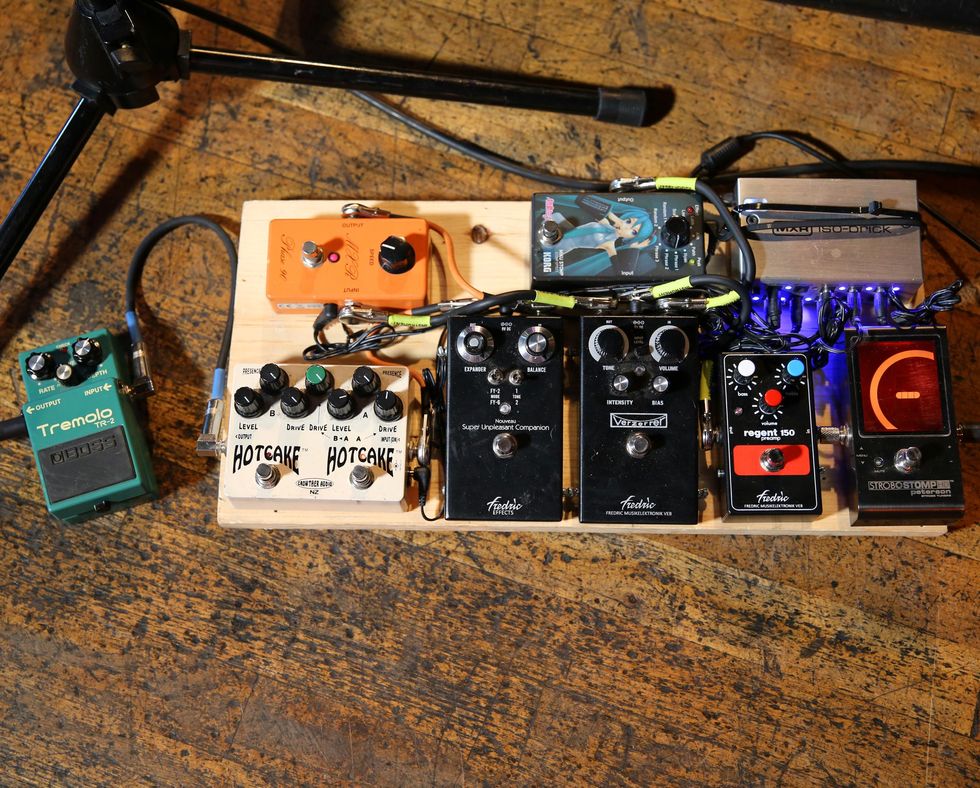 “I like to have movement. I like to have things morphing, constantly have things imaging,” says Kelly. The pedal party starts with the always-on (albeit, subtly slow) MXR Phase 90. Next is his favorite pedal of his—the Crowther Audio Double Hotcake. (“It’s the clearest distortion and I love that I can get notes to be saturated and crystal clear.”) Following that is a trio of Fredric Effects: a Nouveau Super Unpleasant Companion (a combined Shin-Ei FY-2 and FY-6 Superfuzz clone), a Verzerrer (a recreation of East Germany’s only distortion effect, the Bohm Trickverzerrer), and a Regent 150 preamp (a revamped reproduction of a 1970s East German preamp that peels out the EQ circuit from the Vermona Regent 150K amplifier). The Boss TR-2 Tremolo is there when he backs up opener (and Nashville production icon) Dave Ferguson, who actually provided Kelly with the pedal. Possibly the most bizzaro pedal the Rig Rundown has encountered is this Korg Miku Stomp that employs 11 lyric patterns that basically turn your guitar (or anything, as Kelly elaborates in the video on his own exploration with the effect) into a teenage-girl Japanese anime character. You have to hear it to believe, so tune in! And lastly, Kelly turns everything on with the MXR M238 ISO-Brick.

From Your Site Articles

Related Articles Around the Web