The family of a 10-year-old girl who choked herself to death as part of a TikTok challenge is suing the video platform for negligence and having a ‘defective design.’

Nylah Anderson of Philadelphia was found unconscious in her mom’s bedroom closet on December 7.

She hung herself from a purse strap after seeing videos related to the ‘blackout challenge’ on the app’s ‘For You’ page, according to a lawsuit filed Thursday in federal court in Pennsylvania.

The challenge encourages users to asphyxiate themselves, pass out and regain consciousness on camera.

Nylah’s mother Tawainna says the company is to blame for her death because the content ‘was thrust in front of’ her.

‘I cannot stop replaying this day in my head,’ Tawainna said at a press conference Thursday. ‘The unbreakable bond in our family is now shattered and void.’

Last year, a 12-year-old boy died after using a shoelace to choke himself for the same challenge, his family says. 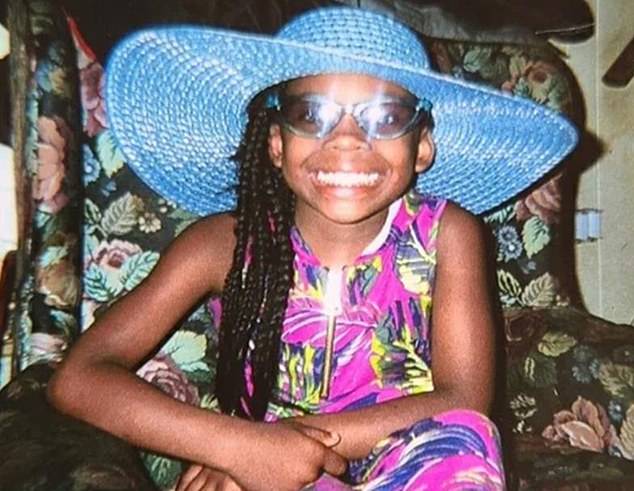 Nylah Anderson, 10, was found unconscious in her mom’s bedroom closet on December 7 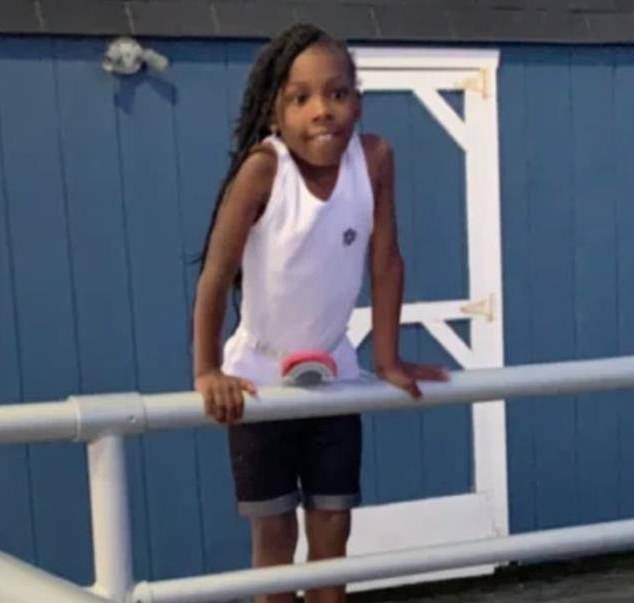 The ‘active’ and ‘incredibly intelligent’ girl choked herself with a purse trap for a TikTok challenge, according to a lawsuit filed by her mother 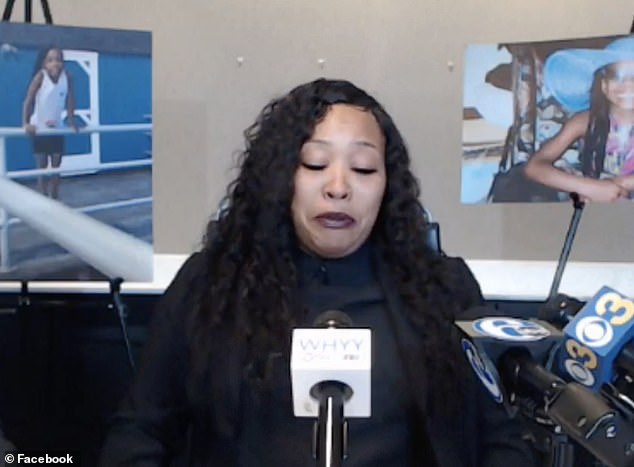 Nylah’s mother Tawainna is suing TikTok for ‘thrusting’ the dangerous challenge in her daughter’s face. She is asking for unspecified damages

Nylah was an ‘active, happy, healthy, and incredibly intelligent child’ who spoke three languages, according to the lawsuit.

She is survived by her mother and her two brothers, Nakye Anderson and Kevin Freeman Lamarr Neal III.

The 10-year-old girl tried the ‘blackout challenge’ in her mom’s closet while her mom was downstairs.

A forensic analysis of her phone showed that the app was in use at the time, according to her mom’s attorneys.

‘Nylah endured hellacious suffering as she struggled and fought for breath and slowly asphyxiated until near the point of death,’ the lawsuit states.

Tawainna found her daughter and tried multiple rounds of CPR on her until paramedics arrived.

Nylah spent five days in the pediatric ICU and died on December 12, 2021.

Her family’s lawsuit, which asks for unspecified damages, holds TikTok accountable for designing an app that promotes dangerous challenges to children.

A search for the hashtag #blackoutchallenge on TikTok yields no results as of Thursday afternoon. The company says its main app is intended for people 13 years or older, though it also operates a version of the app designed for younger users.

In a statement before the lawsuit was filed, the Chinese-owned company said: ‘This disturbing “challenge,” which people seem to learn about from sources other than TikTok long predates our platform, and has never been a TikTok trend.

‘We remain vigilant in our commitment to user safety and would immediately remove related content if found.’

But Nylah’s mother says the company intentionally designs its app to keep its young users’ attention at any costs.

The ‘algorithm determined that the deadly blackout challenge was well-tailored and likely to be of interest to 10-year-old Nylah Anderson and she died as a result,’ the lawsuit states.

It cites a number of other dangerous challenges, including the ‘Orbeez challenge,’ which encourages viewers to shoot the plastic pellets at people.

Also named is the ‘Benadryl challenge,’ in which people drink large amounts of the cough medicine until they hallucinate. 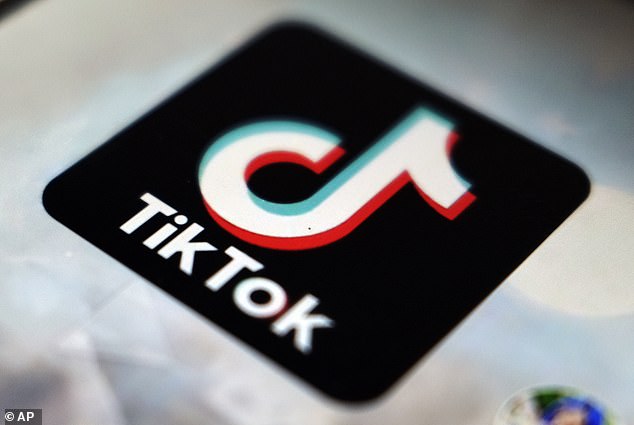 A search for the ‘blackout challenge’ on the video app yields no results as of Thursday afternoon. TikTok says its main app is geared toward users 13 and older 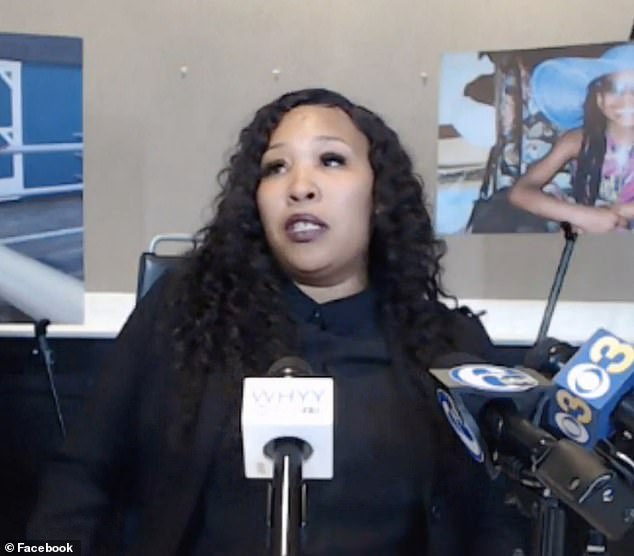 ‘I accepted that my daughter’s voice is gone forever, so I’m going to speak for her, and the message here today is something has to change,’ Tawainna Anderson said

Another one is the ‘Nyquil Chicken Challenge,’ which ‘involves soaking chicken breast in cough medicine like Nyquil and cooking it, boiling off the water and alcohol in it and leaving the chicken saturated with a highly concentrated amount of drugs in the meat,’ according to court documents.

Tawainna Anderson’s product liability and negligence lawsuit ‘seeks to hold TikTok responsible for their role as designers, programers, manufacturers, sellers and distributors of their dangerously defective social media products and for their own independent acts of negligence.’

Speaking with her lawyers at a press conference, Nylah’s mom said she’s taking a stand for other children.

‘I accepted that my daughter’s voice is gone forever, so I’m going to speak for her, and the message here today is something has to change.

‘Something has to stop because I wouldn’t want any other parent to go through what I’m going through ever since December 7,’ Tawainna said.

Last April, a 12-year-old Colorado boy died after his parents say he used a shoelace to choke himself until he lost consciousness for the same challenge.

The family of Joshua Haileyesus shared an update on a GoFundMe page that confirmed his passing. 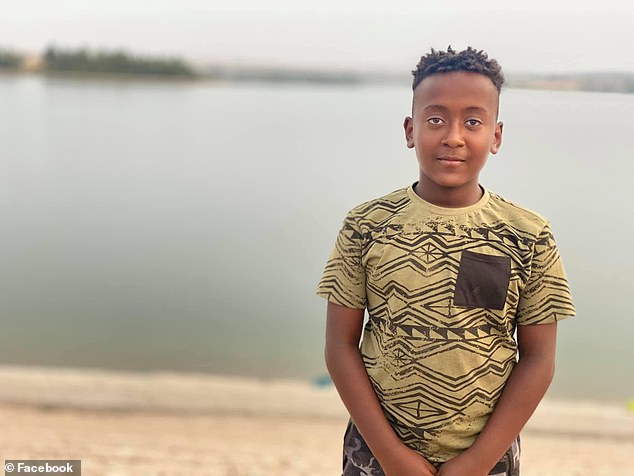 Joshua Haileyesus (pictured), 12, died after his parents say he used a shoelace to choke himself until he lost consciousness for TikTok’s ‘blackout challenge’ 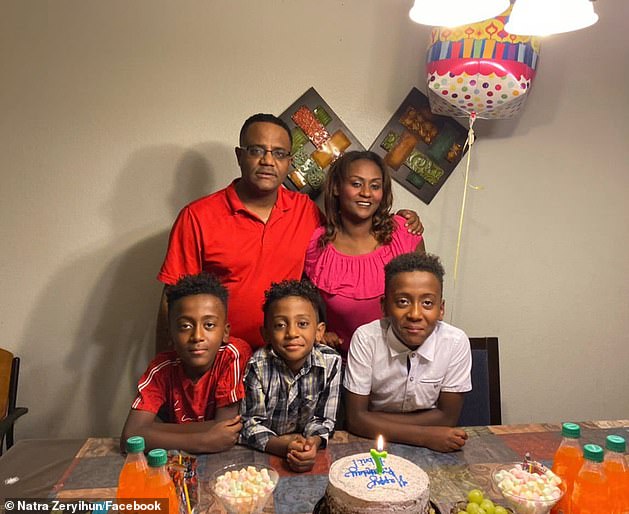 Joshua was found passed out in the bathroom of his home by his twin brother on March 22. His family (pictured) believe he may have been using the shoelace to take part in the challenge

‘After fighting the good fight on life support for 19 days, Joshua has gone off to be with the Lord,’ the family wrote.

‘Your prayers and your love have comforted us and we are grateful for your support.’

Joshua was found passed out in the bathroom of his home by his twin brother on March 22, 2021.

His brother tried to resuscitate him until neighbors and the ambulance arrived, according to the family.

His family believes he may have been using the shoelace to take part in the Blackout Challenge, which has been circulating on TikTok over the last year.

Joshua’s death is mentioned in the latest lawsuit.

About 28 percent of its users are children under the age of 18, according to the lawsuit. By April 2020, the company’s total worldwide downloads surpassed 2 million.