Antonio Conte says Liverpool boss Jurgen Klopp was looking for an “excuse or an alibi” when he criticized Tottenham’s style of play following the 1-1 draw on Saturday.

Klopp said he could never coach the tactics that Conte adopted at Anfield, even though Spurs had the better chances and could have won the match in the closing stages.

The German later suggested his remarks were meant as a “backhanded” compliment.

But Conte hit back on Tuesday, saying: “Jurgen is an intelligent person, very clever.

“For the coach, it is not simple after the game, you have to try to keep your head cool. Sometimes it is not easy and many times if you remember this season I was disappointed with the result and myself and my players. 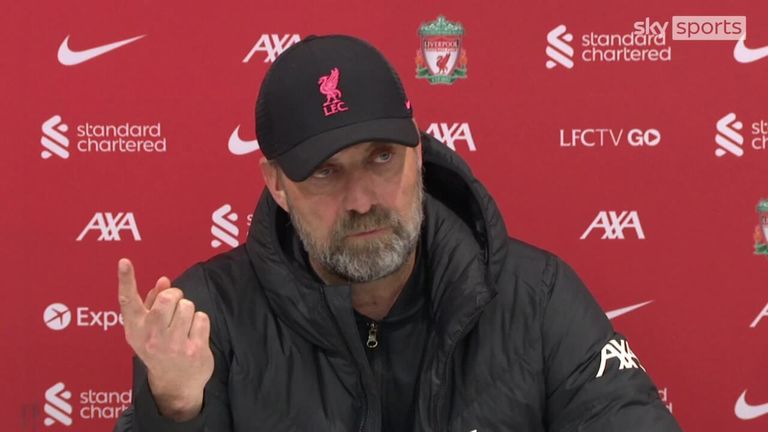 Liverpool boss Jurgen Klopp was critical of Tottenham’s tactics after their 1-1 draw at Anfield on Saturday, saying: ‘I don’t like this kind of football’

“I have respect for Jurgen and I know he respects me a lot and this is a good chance for him and me to learn that during the game you never have to speak about your opponent. It is important to be focused on your team.

“He was a bit frustrated after the game but at the same time for every coach it is important to learn to be focused on your team, not the opponent. It means you want to find an excuse or an alibi because your job was wrong. “

However, the German manager has since retracted his remarks as he hailed the work that Conte and Atletico Madrid’s Diego Simeone do in setting their teams up to defend.

“No. It’s what I think, it’s just not what I should say because it’s not appropriate,” Klopp told reporters when asked if he would contact Conte to apologize. “We didn’t lose and it felt like a loss.

“One of you guys asked how they defended and that was the moment it clicked. I mean it when I say I couldn’t coach it – it was a backhanded compliment.

FREE TO WATCH: Highlights from Liverpool’s draw against Tottenham in the Premier League

Up next for Conte and Spurs is a monumental north London derby fixture. Arsenal visit the Tottenham Hotspur Stadium on Thursday night, live on Sky Sportswith Champions League qualification on the line.

“We are talking about an important game,” Conte said. “Important for many different situations.

“First we are playing this game for an important target. For a place in the Champions League. This is first, to try to win this game. I also know the importance for our fans of this derby, the north London derby. This is the first time they’re playing this derby in their stadium with all the fans.

“We have to try to get three points against Arsenal. We are talking about a good team, a really well-organized team. Arteta is doing a really good job. He’s had the possibility to work and improve his team. In this moment of the season it has to give us a big push.”

Follow every Tottenham game in the Premier League this season with our live blogs on the Sky Sports website and app, and watch match highlights for free shortly after full-time.

Want the Tottenham latest? Bookmark our Tottenham news pagecheck out Tottenham’s fixtures and Tottenham’s latest resultswatch Tottenham goals and videokeep track of the Premier League table and see which Tottenham games are coming up live on Sky Sports.

Get all this and more – including notifications sent straight to your phone – by downloading the Sky Sports Scores app and setting Tottenham as your favorite team.

Hear the best Premier League reaction and expert analysis with the Essential Football and Gary Neville podcasts, keep up-to-date with our dedicated Transfer Centerfollow the Sky Sports social accounts on Twitter, Instagram and Youtubeand find out how to get Sky Sports.