Conte said he would happily “sign” for something like the seven-year reign Klopp has enjoyed at Liverpool; he sketched out how the long rebuild might work, talking up the “patience” Liverpool showed at the start, and then the “big money” they spent to turn the team from contenders into winners.

A nice idea, but could it ever happen? The longest Conte has spent in one job is three seasons at Juventus. Conte is a brilliant coach, as he showed again on Saturday, but he prefers to burn out than fade away. The prospect of Conte still being in charge in N17 in six years’ time feels not much more likely than Spurs changing their home kit to red.

The day after Conte speculated about his Spurs future, Arsenal announced that Mikel Arteta had signed a new contract at the club — one that had been offered to him even after Arsenal lost three straight games in April (to Crystal Palace, Brighton and Southampton). It was a gesture that almost moved Arteta to tears. He talked about his long-term plan to take Arsenal “to the next level” on and off the pitch, and everything he would do to get Arsenal there.

Arteta has already had two and a half seasons at Arsenal. If he sees out this new contract then he will have done five and a half. Guessing the future is impossible, but this news does at least give Arsenal the sheen of stability going into Thursday’s derby. Tottenham still look like they are in a permanent state of flux.

When was the last north London derby this big? March 2016, when Spurs missed the chance to go top despite Harry Kane blowing the roof off the old White Hart Lane? March 2013, when Andre Villas-Boas boasted he had put Arsenal into a “negative spiral”, only for the reverse to be true? Or April 2017, the last ever at the old White Hart Lane, with all the emotional power that conveyed?

This game has elements of all of those. It is the first derby to be played in front of a capacity crowd at the full stadium, and so the first to be played to full fans in N17 for five years. It might be the biggest game at the new ground, with tickets and passes even harder to come by than the Manchester City and Ajax Champions League ties in 2019. It is Spurs’ biggest game since the Champions League final that same year, and Arsenal’s since the FA Cup final the following summer.

But on top of that, this game feels like a judgment on how Arsenal and Tottenham have operated over the last few years. Take a step back and each team has more or less the same strategic issue: how can a side on the fringe of the elite, with a big stadium but no benefactor injections, force their way back to the very top? What do you have to do to even get close to Manchester City and Liverpool? How do you get to be a big club again?

One option is simply to behave like a big club Even though Conte told Spurs to behave like a “top club” on Tuesday (regarding fixture scheduling), this is what Tottenham Hotspur have been doing over the last three years. Ever since their new £1.2 billion stadium opened in April 2019 it has felt as if every major decision at Tottenham was taken with this in mind. What would a big club do? How would they radiate their big-clubness to the rest of the world? For years Tottenham were all about a gradual rebuild, young players, and planning for the future. But over the last three seasons the direction of the club appears to have pivoted away from patience. 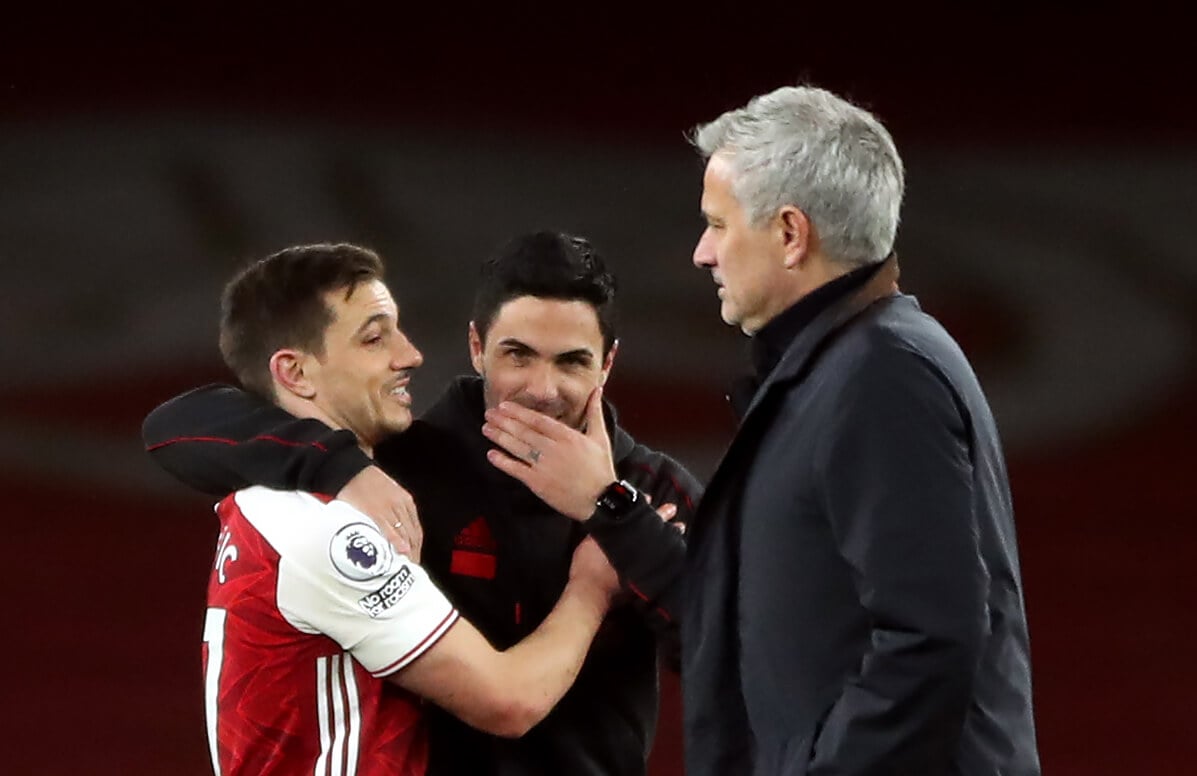 Arsenal opted for a patient rebuild under Arteta, while Spurs tried to ‘win now’ with Mourinho (Photo: Getty)

There was an intoxicating logic behind this. Within two weeks of opening the best new stadium in English football, Spurs had knocked Manchester City out of the Champions League. Three weeks after that they had knocked out Ajax too. Building up to the Champions League final in Madrid, Tottenham felt like the center of the football universe. They lost the final and were determined to go again, breaking their transfer record to sign Tanguy Ndombele, and inviting Amazon cameras in to broadcast their inner workings to the world.

Soon enough it became clear that the Mauricio Pochettino was crumbling and so Daniel Levy wasted no time getting rid of him and bringing in Jose Mourinho, believing he had finally appointed one of the two best managers in the world. Coming in 2019, long after Mourinho’s peak, it looked as if Spurs were more interested in behaving like a big club rather than making sound footballing decisions.

At the end of that season, Tottenham arranged high-profile but ultimately low-impact loans for Gareth Bale and Alex Morgan. During the following year they signed up for the European Super League and then sacked Mourinho days before the League Cup final in an attempt to secure a place in the next season’s Champions League.

Tottenham briefly considered a rebuild in 2021, under Erik ten Hag or Graham Potter, but instead decided to stick with the ‘big club’ route. They brought in Fabio Paratici from Juventus, tried for Conte, got turned down, and then effectively employed a glorified caretaker in Nuno Espirto Santo. They dug in and kept Harry Kane, denying him a move to Manchester City. And within months they had convinced Conte to replace Nuno and take over.

Every major decision since the stadium opened, then, has been with an eye on the here and now. About maximizing their short-term chances and profile. About projecting Tottenham’s image to the world as a club that is modern, relevant, and ready to win.

Now, maybe this makes sense. Levy has been blamed so much over the years for doing the opposite — for being too cautious at moments of maximum opportunity, like the January 2012 window, or during the peak years of the Pochettino team. It would be unfair to criticize Levy for both patience and impatience. After all, what is the point of having a £1.2 billion stadium if you do not try to win in it? The stadium may be a permanent asset, but Kane and Son Heung-min are not. They are two world-class players currently at the peak of their powers. What good is a five-year plan to an athletic forward in his late 20s who just wants to win something?

(Similarly an argument is also made in defense of the decision to appoint Mourinho that the Spurs dressing room, having played in a Champions League final, would not have accepted an Eddie Howe-level appointment. This may well be true, but it does take as its premise that those were the only two options that autumn, with no one in between.)

But has any of this worked? Spurs finished sixth in 2019-20 and seventh last season. They have reached one cup final and lost it to Manchester City. They have not played in the Champions League since they were knocked out by RB Leipzig at the start of the pandemic. Only in the last few months under Conte have Spurs started to look like a good team again, the best they have been since the peak Pochettino years. By most measures they have been the third-best team in the country since Conte arrived. But the big question going into Thursday, and the final straight of the season, is whether it will be enough.

There is another way to try to be a big club. You do not have to buy it all in. You can try to grow it yourself patiently. Wind back to the last time that Tottenham could count themselves one of the best teams in the country, not very long ago. They appointed a young manager in Pochettino in 2014 and trusted him to rebuild the team in his own image of him. They got rid of the senior players who did not buy into his methods. They brought through a new generation of youngsters and signings who did.

Soon enough, Spurs developed their own distinctive style of play, with a team of young, hungry players enthusiastically implementing their manager’s instructions all over the pitch. Now, which current Premier League team does this sound like?

It feels as if Tottenham have forgotten the principles that made them so consistently good under Pochettino. As if they had out-grown them, or as if they believed that Pochettino and his staff were just participants in Spurs’ golden age of 2014-2019, rather than the cause of it. And if Tottenham have discarded those principles as belonging to their last decade, well, then why shouldn’t Arsenal pick them up and try them on instead?

In fact, Arsenal appointing Mikel Arteta in December 2019 was a far bigger risk than when Spurs appointed Pochettino, who had two very good management jobs behind him at that point. But the overall direction of travel has been the same. Arteta has been allowed to get rid of senior players like Mesut Ozil and Pierre-Emerick Aubameyang. He has largely replaced them with young, hungry players who do buy into his ideas from him. Player power has largely been extinguished. There is no questioning Arteta’s authority at the club.

Who knows where it will end up, whether Arsenal will stumble and miss out on fourth. But either way, they are clearly heading in the right direction. After two eighth-placed finishes they could even end up third this year, most likely with a points total in the low 70s, their best since 2017-18. That alone is a vindication for the decisions taken over the last few years, of the wisdom to take two steps forward by taking one step back.

The challenge for Tottenham came when the hunger fueled the first half of Pochettino’s reign started to fade in his last few years. Players started to get bored, and had their heads turned by the chance to earn more or win more elsewhere. Pochettino wanted to sell the jaded players and replace them with new hungry ones, but it never happened. It will be fascinating to see whether Arteta’s Arsenal face the same issue, but that is far in the future. That team has not peaked yet.

Because while Arsenal now resemble their own version of Pochettino’s Spurs, the team Tottenham’s recent strategy seems to mimic is Chelsea. They have moved out of their long rebuild phase. They have a core of powerful senior players. They appoint a new experienced head coach on a regular basis and hope that it works. There is nothing inherently wrong with this strategy — it won Chelsea plenty of trophies during the Roman Abramovich era. But it does rely on having such a good squad that can adapt fast to whoever comes in.

This is why Conte being at Tottenham is so compelling. If any manager in the world is good enough to make sense of this mini-era at Spurs, it is him. Three wins in the next 10 days and a favor from Newcastle United and he will have guided Spurs back into the Champions League, a huge achievement given where they were in November. It would be a vindication not only of his own work but of Levy appointing him, and his whole strategy of keeping the club focused on his immediate ambitions.

But lose tonight, and lose that spot to Arsenal, and it will feel as if Spurs’ impatience and big-club radiance has — at least for now — been supplanted by Arsenal’s longer view.